Winding My Way through the Past, and the Petrified Forest

Last time I blogged, I promised I’d write about the drive from Flagstaff, Arizona, to Monterey, California. Well, I completely forgot about the miles between Albuquerque, New Mexico and Flagstaff. So Monterey will have to wait. 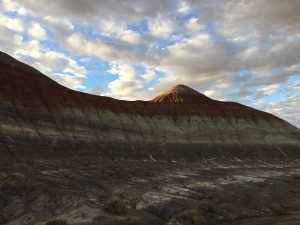 Let’s begin this leg of the journey with a story: when I was younger, I was famous for running my car out of fuel. I wound up stranded along the side of the road more times than I can count. Usually, that meant calling a friend for help. Or a husband. Not this time, though.

I had so much fun at the balloon festival that I left 90 minutes later than I planned, at 10:30 a.m. After dropping by Cracker Barrel to rent an audiobook, I stopped at Garcia’s Kitchen for brunch. There, I ordered sopapillas, which I hadn’t eaten in two decades. Not since the last time I was in Texas with family. I split open the delicious pockets of deep-fried dough and filled them full of butter and honey. And was I on Cloud Nine! 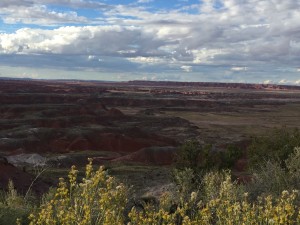 My book on tape kept me occupied, and awake at the wheel, since I’d gotten up at 3 a.m. to see the balloons. Before I even knew it, I had driven through Gallup, New Mexico, and then finally, crossed into Arizona. Where I found myself smack dab in the middle of the Painted Desert and the Petrified National Park – which carried me back to my childhood days, when my parents, my sister, Lisa, and I visited on a family vacation.

It felt like déjà vu, and when I snapped a quick photo of some pieces of petrified wood inside the shop for tourists, I was certain I had been there before. The clerk said I was actually standing in the original building, which had been much smaller. But yes, it had been there since the 1950s. How’s that for a good memory? Even as I grew more bleary eyed by the moment.

I didn’t plan to drive through the entire park, just wanted to grab a few photos and then hop back on I-40. But a nice park ranger said if I wanted to keep going, the road would lead me back to the interstate 20 miles or so later. And I’m so glad I did. It was one of the most beautiful and awe-inspiring portions of my entire journey. 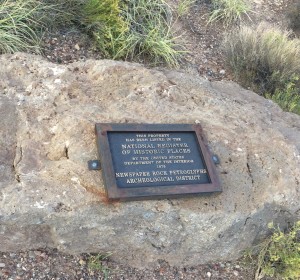 Having logged quite a few miles already, I really wanted to break early for the night, but every motel I passed was full. Then, as I left Winslow, I realized I had forgotten to fill my gas tank. My digital dashboard said I the tank would be dry in less than 15 miles. I hoped I would find a gas station somewhere soon, since I was already on the entrance ramp and in the midst of traffic.

I even exited again, not long after, when a sign with the word “Shell” held out the promise of fuel. That sign lied – plus, I was the only soul there. So I headed west on I-40 again. By the time I drove 16 miles past the zero on my dashboard indicated the tank was “empty,” I feared each successive minute would find me stalled along the road. It wasn’t late, not quite 8 p.m., but the traffic on that stretch of lonely highway was sparse. And pitch black! 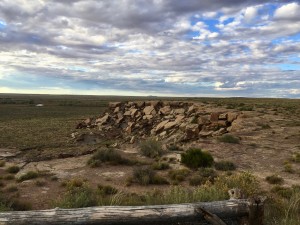 So when a road sign with the words “Twin Arrows Resort” appeared, I breathed a deep sigh of relief. Surely, where there was a resort, there would be a filling station, right? Nope. Not a single one. Instead, bone weary, I drove into the parking lot of the resort, which turned out to be a Navajo Casino. And there, the nicest young man, a valet attendant, used his walkie-talkie to contact hotel security. He wasn’t sure they would have unleaded fuel, though, or how long before security would arrive, so he suggested I grab a coffee from the café inside. Considering I’d been awake since the middle of the previous night, I did just that. 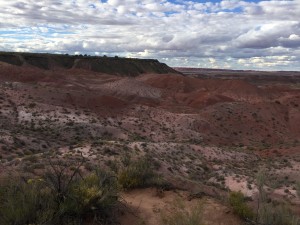 Now for a confession: I’ve been inside a couple of casinos throughout my life. But I have never even operated a slot machine, much less played blackjack or any other game. Not once. (I have, however, learned that I am a gambler. I’ve gambled twice now, on husbands. Let’s just say I didn’t hit the jackpot either time.) Instead of playing the slots, I wandered around looking at the luxury all around me, and felt compelled to take a photo of the lobby chandelier, which looked like it was created from beads of oil. 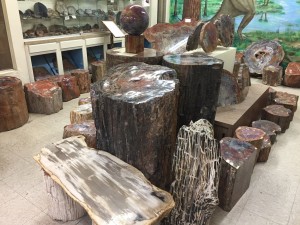 Thirty minutes later, the casino manager gave his approval and a sweet security guard poured unleaded fuel into my tank. I wasn’t even a paying casino customer, but they refused to take a nickel of my money to cover the cost. Someone has since told me that’s true western hospitality. Call me a believer. 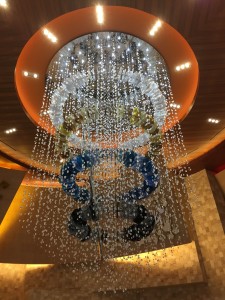 I hope y’all will join me next time, when we finally cross the California state line and wander up the most beautiful coastline in the country.