Yesterday was brutal. Listening to Dr. Christine Blasey Ford testify yesterday about how she was almost raped by Supreme Court nominee Brett Cavanaugh was brutal. Her terror, anxiety, and anguish resonated with me. Her raw pain washed over me. 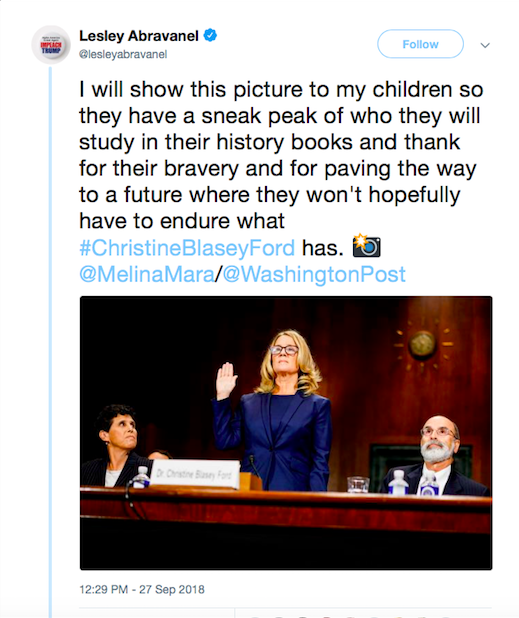 I’m a sexual assault survivor. So are at least four other women who are quite close to me. We are kind, intelligent, hard-working, social do-gooders. We care about making the world a better place and strive to do so—and yet, at one time or another, we have all been in Dr. Ford’s shoes. Not so much the public testimony, given that she’s been dragged into a spotlight she never wanted to stand in. No, we certainly haven’t been forced to testify in front of an entire nation.

I voluntarily spoke up publicly about my rapist many years ago, while my loved ones have remained silent about their experiences. That is their choice and their right, just as going public was mine.

I didn’t know how much Dr. Ford’s testimony bothered me until last night while driving home. Then I felt like I was going to have to pull off the road and throw up. I’m sure it didn’t help that I also crossed paths with a man who ogled me yesterday, quite possibly undressing me with his eyes. Ninety-nine percent of the time, I can handle such crass behavior. But yesterday it was a bit much.

I’m neither Democrat nor Republican. Even if I was, this is not the political football some people claim it is. Plain and simple, this is about the problem of violence against women. Dr. Ford’s testimony is about women being treated like sexual objects by men and boys who should—surely by now—know better. It’s the same issue as it was 27 years ago with Anita Hill, when she accused then-Supreme Court nominee Clarence Thomas of similar misconduct.

I can relate to Dr. Ford’s testimony, especially her terror as a fifteen-year-old, of having someone on top of you so heavy you cannot escape, or having that boy place his hand over your mouth to prevent your screams for help, making you feel like you’re being smothered.

And yet, people still question her. Quite frankly, I’m tired of seeing the weaker sex disbelieved—especially by their own kind. By other women. When I recently posted on Facebook about Dr. Ford coming forward, some women said: “I don’t believe it.” Why not? The Centers for Disease Control says one in three U.S. women experience sexual assault. This is a fact; it isn’t fake news. Statistical data went into that fact-based finding. (However my own research, in talking to other women throughout the years, is that it’s one in two.)

Women want to take care of people. We want peace. We want to build up and have unity—not tear down. We do not want to be made to stand up in public, recounting traumatic details about our abuse. Nor do we do so for political reasons. That is quite possibly the most ridiculous thing I’ve heard. Few women are strong enough to do what Dr. Ford did yesterday. That’s why most of us remain silent. That’s also why Axios reported that the “Rape, Abuse & Incest National Network (RAINN) estimates the National Sexual Assault Hotline saw a 147% increase above normal (call) volume Thursday.”

Everything about Dr. Ford’s account, especially the emotional duress she experienced while reliving that high school attack, as she told the nation about it, rings painfully true. And that is why women in record numbers reached out to hotlines yesterday. That’s why two women confronted Sen. Jeff Flake in an elevator and demanded he take a stand for Dr. Ford. Doing otherwise, 23-year-old Maria Gallagher cried out, would mean that her assault “didn’t matter.” That any woman in America who has been so victimized didn’t matter. The entire seven minutes was captured on video. The result, as we learned not long ago, is a limited FBI investigation into Cavanaugh’s background. Good. Now maybe Cavanaugh will take a lie detector test, as did Dr. Ford, who passed hers.

To offset the effects of yesterday, I spent today pampering myself. I journaled, watched an episode of Friends, read a little, went for a swim, and took a nap. I watched a hawk soar in the blue skies above me, smiled at a man taking his puppy out for a walk, and felt grateful for having another day to live. A beautiful, glorious day in which I watched the sun’s rays turn the water into diamonds as I drove across Cheat Lake. I also reached out, speaking by phone to good friends I know and trust. People who ground and comfort me. I’m also eating well today, and plan on turning in early tonight.

Wherever Dr. Ford is today, I hope she’s doing the same. Just as I hope every woman who is reliving her own sexual violence is, too. Pampering yourself is paramount in times like these.