These Knees Are Made for Walkin’

One year ago this month, an anesthesiologist sedated me. Then a surgeon used a power saw to cut through the bones in both legs. When I woke up a few hours later I had two brand-spanking-new knees. They have served me well, too. Five weeks after surgery, I was dancing around my office on them. Recently, they carried me all over Manhattan in New York City, where I walked nine miles in one day. And five the next. 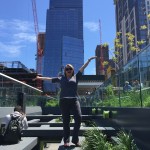 Embracing the day, and life, at The High Line, in Manhattan.

Between those two bookends, I’ve done CrossFit (pushing and bench pressing who knows how many pounds), gone swimming, and taken aqua aerobics and dance classes. I’ve flown to Colorado, driven to Florida, and carried box after box up and down staircases. Last week while shaving my legs, I raised my right one in the shower, placing my foot on a waist-high metal bar. (Now that’s a feat I haven’t done for years!) I also sat on my duff for more hours than I care to recall, where I wrote two books and edited another. That’s 153,000 words, give or take. (And it doesn’t include the 72,000 words I edited for the third book.) Even as I write this, I find these facts amazing given that I had major surgery just two months before I sent the first book to my publisher. 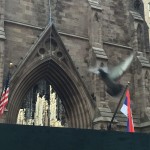 My morning began in NYC began when my son showed me this historic building, Saint Sava Serbian Orthodox Cathedral, believed to have caught fire from a lighted candle.

I am in awe of people who climb mountains, free fall from airplanes, and engage in extreme skiing stunts that would probably kill the likes of me. But for every one of those activities, I have accomplished something equally challenging. And I’ll bet you have, too. It’s easy to forget what we’re capable of—until we look back and see what we did. Activities that, in hindsight, only seem possible with superhuman strength. Divine intervention, if you will. 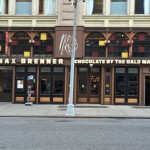 Chocolate By The Bald Man . . . he appears to be the Willy Wonka of New York.

Like arriving by bus in NYC at 7 a.m. one day, pounding 14 miles of pavement, and returning back to Morgantown, W.Va., at 9 a.m. two days later. I made that same trip 10 years ago and thought it would kill me—and my turnaround time then was nothing like this recent trip. While exhausted this time, I realized I wasn’t in pain like the last time. Then, every part of my body ached, especially my back. The only thing I can attribute the lack of pain to this time is my bionic knees. (Compliments of Dr. David Tuel, surgeon extraordinaire.) And that makes sense, when you think about it. If you have one broken body part (or, in this case, two), it’s going to affect the rest of you. 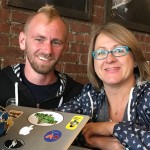 My favorite sight in all New York City was my son and walking partner for the day. He’s just started a hiking company in the San Francisco Bay Area, so if you’re looking for a great tour, he’s your guy!

That’s why it’s important to take care of the body you have right now, with good nutrition, proper rest and exercise, occasional mental health days, and moderation in all things. It’s also crucial to get any repairs taken care of in a timely manner. Before it’s too late and you’ve ruined something you dearly need—like a leg. Or a liver. 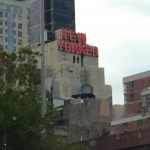 Both coming and going . . . as I entered the Big Apple I glimpsed this majestic sign. Two nights later as I left the city, I found myself right in front of The New Yorker building. Where I drooled at the thought of my literary brethren who write for this prestigious magazine.

Because once that happens, you won’t be walking nine miles anywhere.

Editor’s Note: Effective June 2, 2016, Ms. Berry’s blog will begin appearing each Thursday, rather than Monday, as it has been. Berry is a New York Times best-selling author and a recipient of the Pearl Buck Award in Writing for Social Change. She has won several other awards, for investigative journalism and her weekly newspaper columns, and her memoir, Sister of Silence, placed first in the West Virginia Writers’ Competition. Ms. Berry speaks about overcoming abuse through awareness, empowerment and goal attainment at conferences around the country. To read an excerpt of her memoir, please go to the Sister of Silence site. Check out the five-star review from ForeWord Reviews. Or find out why Kirkus Reviews called Ms. Berry “an engaging writer, her style fluid and easy to read, with welcome touches of humor and sustained tension throughout.”