I crossed the California state line in San Bernardino County at 3:18 p.m. October 2, not far from where the Mojave Desert meets the San Andreas Fault. “Not far” being a relative term for a woman who had already logged more than 5,000 miles on her Toyota Prius – much of it on Route 66. 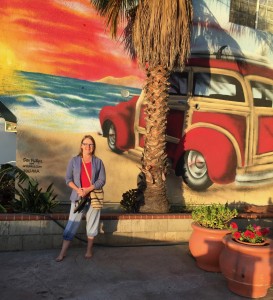 Even in spite of earthquake warnings, it felt good to be home. For anyone who doesn’t know, I’m a California girl by birth, born in a city made famous by the song my parents sang to me as a toddler. Those same parents laughed at the idea that yes, the Golden State might really be hit by an earthquake that would knock it into the ocean one day. Turns out, as I arrived in California, the fear of another earthquake loomed large. That’s okay. I survived one earthquake here in 1999. I was driving on I-580 near Pleasanton, and never knew it happened until I heard my coworkers discussing it.

Driving through the desert, my car’s thermometer told the tale: it was a balmy 99-degrees outside. I was surprised, though, at how cool it felt. No doubt the dry climate was responsible, for 99-degrees in Florida (or West Virginia) would have drenched me in sweat. 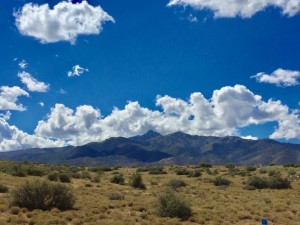 Speaking of sweating it out, during my trip west I listened to the audio version of The Girl on the Train. Can you say red herring three times really fast? It was one of the most twisted tales I’ve ever heard (or read). Nothing was as it seemed. 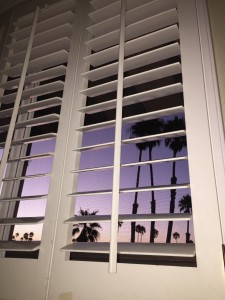 I haven’t visited California in a while, but since two of my four children are here, I’ve been trying to return for the last three years. So I’m long overdue. But I’ve been a little busy, writing several books during that time, so no wonder it’s taken me this long. I drove through miles and miles of desert, thinking about the direction my life has taken, and looking forward to seeing my son and daughter again, when several hours later, my car’s odometer hit 130,000 miles. Not long after I holed up for the night in a little motel in Ventura, California, one block from the beach. 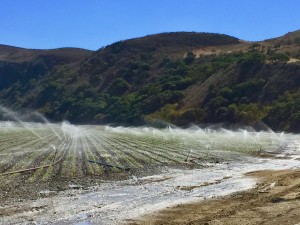 The next morning, I woke up in time to see the sunrise, roll up the cuffs of my pants, and enjoy a barefoot walk on the beach, where I collected beach stones and watched seagulls at play. When I returned, a woman named Cheryl caught me snapping photos and offered to take one of me standing in front of the motel’s colorful mural. In return, I gave her a copy of one of my books and we parted friends. 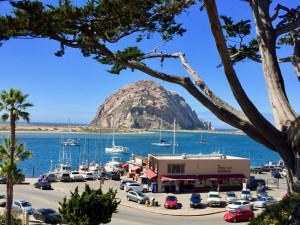 After I got on the road, I drove by vineyards and fields full of crops, passing migrant farm workers along the way, before hitting Highway 1 and winding my way up California’s rocky coast. I stopped at Pismo Bay, where I watched pelicans swoop and dive, as a pod of whales swam in the open waters. Further north, I dropped by Morro Bay, where sunbathing sea lions entertained me. As my little car climbed higher and higher along the coastline, distant memories of Monterey and Carmel and Big Sur returned, and in my mind’s eye I saw my four children, running into the surf, hiking through the redwoods and sequoias, and posing for the graduation photos I snapped along the water’s edge. 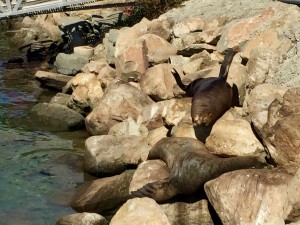 This coastal drive is, hands down, the most spectacular in the country. Wild and wonderful and unspoiled, with only a few commercial businesses along the way. (And nary a restroom along one particular two-hour stretch, which left me rushing to the ladies room when I finally happened upon one.) 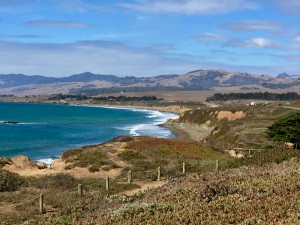 By 4:30 p.m. I was crossing the Bixby Bridge, a suspension structure not unlike the equally impressive New River Gorge Bridge I left behind in West Virginia. I stopped along the road at several places, my shutter snapping away, and even climbed down a narrow, rocky path that offered a closer view of the magnificent architectural feat. The fog hadn’t yet moved in, so the views were breathtaking. 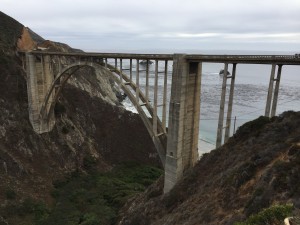 After spending an hour there, I tried to make it to John Steinbeck’s Cannery Row, which I last visited in 1998. Alas, I arrived too late. Plus, I had many miles to go before reaching my destination.

That didn’t happen until 10:30 p.m. – after the first near-miss of my entire trip. I was traveling about 70 miles per hour on I-680 north when a car parked on the berm pulled directly into my path. The driver had not gotten up to speed, so he was probably cruising at 30 m.p.h. Regardless, he was going far too slow to avoid a collision, so I instinctively jerked the wheel and cut across one lane, grateful when the driver on my left did the same.

Other than that, I wasn’t pulled over once, nor did I run out of gas (despite a close call). In fact, the only downer during my time on the road occurred when I realized it was probably the first and last time I would experience such a journey. For the most part, I found friendly folks throughout the country, and came away with so many new stories I’ll be hard pressed to find time to tell them all.

All in all, from North-Central West Virginia to the southern most tip of Florida and back up, and clear across the wild, wild West, I drove 5,799 miles, going from the Atlantic to the Pacific Ocean in 34 days. The journey of a lifetime, it’s one everyone should be so fortunate to experience.

And I loved every single minute!

I was wondering when you were going to document (and share) the experiences of your road trip of a lifetime. I am glad to hear you safely made it to California and I look forward to visiting with you sometime in the future. (Your friend and sister . . . )