I’m a Snowflake—and Proud of It!

As I watched some of the inauguration online, I began thinking about the last few months. Boy, have they been busy! Especially for some people, like the Trump supporter who emailed me recently, calling me a snowflake. Google helped me better understand the reference, confirming that the term was used in a derogatory way.

So, I decided to take lemons and make lemonade. (Like Trump’s own “deplorables” did, and good for them!) The word snowflake, as used by some folks, refers to “a self-imposed victimhood” by people who are so delicate they can’t handle, well, anything.

I love snow. And building snowmen, and lying in a bed of soft snow, making snow angels.

Snowflakes have been called “one of nature’s finest masterpieces.” Yes, they are delicate: hundreds of delicate ice crystals comprise these works of art. And yet—“two identical flakes have never been found.” That’s according to the book Atmosphere, which also says: “The endless variety of snowflakes is legendary. . .”

So, I’m beautiful and unique—and you are, too, if you’re a snowflake.

But that’s not all. As they fall through the air, snow crystals carry compounds of nitrogen and sulfur, which clean the atmosphere, supply moisture, and fertilize soil. How’s that for efficient, powerful, and just downright necessary for continued life? 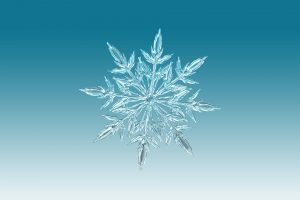 Snowflakes are also inanimate beings that have nothing to do with politics. Which is important to understand, given what I’m about to say.

Some of you believe I’m a Hillary Clinton supporter. Let the record accurately reflect that I am not. (I was especially not a supporter when she stood by her cheating husband, a man who disgraced the office of POTUS directly in the Oval Office. However, I respect the fact that marriage is a sacred union, and as such, I have no right to tell anyone else how to handle theirs.) That said, I certainly do appreciate Hillary’s many positive actions on behalf of women and children.

Still, the bottom line is, I hate politics—because they’re divisive. Especially in 2016. Will these divisions continue in 2017? So far, it doesn’t look promising. We’re just twenty days into the new year, and already there is no sign of a slowdown in the strife and name calling.

I’ve experienced it and if you’re a snowflake (or a deplorable), you have, too. As a result, I felt forced to take a hardline stance on Facebook recently, instituting a policy for anyone who visits my page. My rules are nothing more than common sense and courtesy, but since both have gone out the window lately, I found the need to post them.

Speaking of that, there’s courteous, there’s civil, and there’s respect. Each one is different. I can be courteous and civil, while still failing to respect someone. Take my stance on the 45th POTUS: I highly esteem the office, but I’m still waiting for the man to earn my respect. He could begin by apologizing—publicly, on Twitter—for using it as the bully pulpit he’s turned it into.

Because, as Rep. Mark Pocan said, when asked if he was attending today’s inauguration, “At minimum, it’s time for Donald Trump to start acting like President Trump, not an immature, undignified reality star with questionable friends and a Twitter addiction.”

And Trump’s continual attempts to malign the press—who is trying to hold him accountable—by saying “the dishonest media” is no different than saying that all businessmen are thieves. Or all firefighters are arsonists. Even if you support someone, if you pride yourself on being fair, you must call a spade a spade. Not a shovel. Journalists as a whole are no worse than people in any other profession.

Speaking of businessmen, a good friend of mine spent decades working with Florida contractors who never received their final draw from Trump. Many contractors pay their expenses—supplies and labor—with the first few draws. Any profit comes at the end, with the final draw.

Except when the customer refuses to pay it. Like Trump regularly did. “Did you know any subcontractors who got their final draw?” I asked. “No, not one,” my friend said.

But if you use social media to call attention to anything Trump has done that is wrong, like actress Meryl Streep did at the Golden Globes earlier this month, his supporters will immediately attack you. And try to distract you. This happened to me on Twitter and Facebook, when I posted about Streep’s comments. Perhaps it’s happened to you, too. 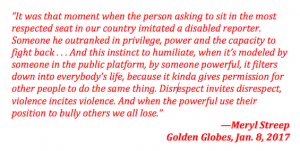 nyone who does that, I say: stop confusing the issues, or, as happened in this case, ignoring them. Trump did mock a man with disabilities, who also happens to be a journalist. It happened. And Streep was spot on for calling it that. Yet Trump supporters quickly attacked her, and turned her words against her, calling her out for her support of Roman Polanski—which occurred 14 years ago.

Yes, Polanski raped a 13-year-old girl. I was raped at 13, so would I take exception to that? Absolutely not! Neither did Streep. Look at the context, which had nothing to do with Polanski’s 1977 actions. The standing ovation given Polanski by the entire audience came about because of the directorial award he received for The Pianist. Would I have stood up for him? Nope.

But that’s not really the point. Neither are Meryl Streep’s 2003 actions regarding Polanski. One act (Streep’s standing ovation) does not cancel out the other (Trump’s mocking). So when Trump supporters try to change the topic, as happens to anyone who tries to hold Trump accountable, please remember why they do it: they don’t want to acknowledge the flaws of someone they have placed on a pedestal.

This is called gaslighting. I have a sinking feeling we’re going to see a lot more of it in the next four years. But only if we let it happen. If we refuse to let argumentative people engage us, there won’t be enough gas to keep the fire lit.

If you’re not sure how to disengage, or stay on topic, just remember that time with your rebellious teenager. You know, when you caught her and her boyfriend necking in his Mustang. So you sentenced her to volunteer at a local shelter for pregnant teens.

She tried to distract you of course, whining and crying and finally threatening to run away—but you didn’t let her get away with it. And in the end, after she saw how bad those teenage moms-to-be had it, she thanked you. (And you didn’t become a grandmother ten years too soon.)

Moreover, if we get off our bums, and remove our thumbs from Twitter, and instead channel our energy into more worthwhile pursuits, we stand a greater chance of extinguishing the gas-lit flame.

If, though, you are suffering the effects of a Trump win, or you’re suffering at the hands of snowflakes like me, I have a recipe to help. In just three easy steps, I guarantee you will feel better.

1. Bake some cookies.
2. Take them next door to your neighbor.
3. While visiting, ask how they are doing, and find out what you can do to help them.

Finally, for a country that claims to be God-fearing (“one nation, under God”), I must say that the American people certainly don’t act like it. Yes, I’m concerned and even a little worried about what havoc the Trump administration might cause. But I’m also completely confident that God has everything under control.

I will get through the next few years the same way I have the last few decades: because I have better, more important things to do. And so do you. For instance, I have more stories to tell, and books to write. I need to work on being a better person, exercise (my mind and my body) more, and—last but far from least—find my daughter.

So close your mouth and move your feet. Volunteer to help people who are already being targeted, be they journalists or Mexicans or Muslims. Or anyone else who needs it.

Are you ready? Good, because believe it or not, we will survive!