A Wheelchair for John

MORGANTOWN, W.Va. — One month later, John has a new set of wheels. The motorized wheelchair, a gift from a local woman who knows exactly how essential such a chair is, has given John back his freedom.

I met John four weeks ago on a snowy Sunday, at the intersection of Route 119 and the Exit 1 off-ramp for Interstate 68. Mine was the second car to stop at the traffic light, which had turned red. That position placed me right beside a man in a wheelchair, asking for donations. When I saw he had a disability—one which could cow even the strongest of individuals—my heart went out to him. 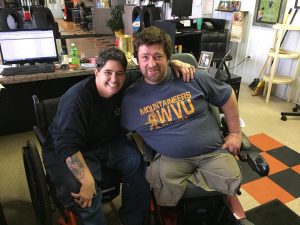 John, you see, has no legs, and only one arm. But he has a smile that will melt your heart, and not one ounce of self-pity.

I couldn’t drive away without giving him something. Without any cash, I offered him the only thing in my car worth having: a leftover cinnamon roll from a nearby Cinnabon. We introduced ourselves and John gratefully accepted my meager gift. But as I reached out the window to hand him the boxed dessert, John dropped it. I watched as he tried using his club hand to pick it up, insisting he could do it.

He couldn’t. Torn between heartbreak and not wanting him to feel helpless, I finally opened my car door. Before I could get out, though, the driver in front of me ran toward us. He picked up the box, and then handed John some cash. 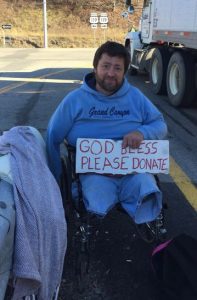 During that brief minute or two, I asked John if he received help from our local social services. That’s how I learned he needed a new wheelchair. His electric chair broke, and he was using a manual one that he could barely maneuver on his own.

When the light turned green I drove away, in my warm, dry car. Wearing nice clothes, my belly full. All I could think of was how cold and snowy it was, how light John’s clothing was, and how much he struggled to accomplish such a simple task. A task that, for most of us, would be as mindless as taking our next breath.

I wanted to reach out to other people, to tell them about John’s plight. Before I even changed out of my dress clothes, I posted John’s story on Facebook. “So, since this is supposed to be the season for giving, if you can, please do. After all, it’s Sunday. And it’s really cold outside,” I posted.

Within minutes, several people commented. They wanted to know if he was homeless. Another woman from Clarksburg, about 45 minutes away, was ready to drive here with a wheelchair for John. The only problem was, it was a manual chair, too. By the time we figured that out, I had driven back to the intersection, where I learned that John wasn’t homeless. In fact, he just obtained housing. I took his phone number and promised to help him find a working electric wheelchair. 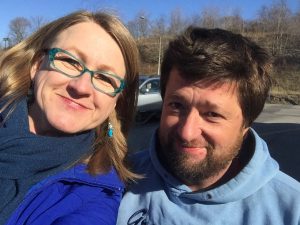 That happened today, when Tammy Belldina from Rainbow Tire, over in Preston County, finally met John, when she gave him his “new” electric chair. This chair, however, isn’t just another mode of transportation. It’s John’s legs.

Tammy and I, fellow Prestonians, have been working together for weeks now, trying to make this happen. Tammy has a heart as big as Texas. Which is why she insisted on buying a new $200 battery for the chair—so John wouldn’t have to. (Most of us wouldn’t know how expensive such equipment is; Tammy told me these chairs can cost $5,000 or more.)

Along the way, we’ve both gotten to John better. I learned that he knows how to, and can even drive, a vehicle. In the past, he’s held down various jobs. One year ago, though, his other arm was amputated due to blood clots—the same thing that happened to both his legs. I can’t go into details, but John has what seems like a good medical malpractice case, and I hope we can find a good attorney for him. 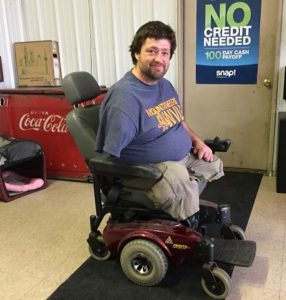 Meanwhile, Tammy suggested we begin a fundraiser of sorts. That fundraiser begins right now. John supports his family of three (including his daughter) on less money per month than I live on myself. We’re asking you to send him checks or even gift cards that will help him purchase some essentials for his family.

Tammy has a special request. “Let’s make sure that little girl gets some Christmas presents, and John has some warm clothes to wear,” she said.

I’m personally asking you to help John because, for the last month, he’s helped me. He’s given me a reason to focus on someone other than myself and my own problems. Problems that include the death of a spouse and a lost daughter. After a year away from my typewriter, I’m 5,000 words into the trilogy that began with Sister of Silence.

Jesus Christ was right: there is more happiness in giving than there is in receiving. Helping John has helped me. Plus, as Steve Maraboli says, “a kind gesture can reach a wound that only compassion can heal.” Who knew, that in giving a stranger some leftover food, I would be the one who was healed?

If you can spare a few dollars to help, I will be indebted to you. Please send any donations to: “Daleen Berry, in care of Friends of John,” Citizens Bank, 265 High Street, Morgantown, WV 26508. I will personally see that John gets every penny, and acknowledges your gift.

After all, ‘tis the season.

This is the sort of story we NEED . Stories that show that that spark of goodness has not been completely snuffed out. That mankind still has that gift of compassion and empathy created in us by Jehovah.

Please keep these coming, my friend, as news is so depressing these days

Great story! Tammy is a friend of mine…. and she has ALWAYS had a heart as big as Texas! She would give the shirt off her back to help someone. Awesome story!

[…] helped other people, too, like John, the man who sat outside in a snowstorm this year, trying to collect enough money from passing […]