You Just Don’t Understand: What Clinton Really Said About Benghazi

All human leaders are fallible, to a greater or lesser degree. They will lie and steal and make deals behind closed doors – or grope women, just because they can.

That said, I couldn’t quite understand why the Benghazi incident continues to have such an impact on Hillary Clinton’s presidential campaign. So I began digging. And, after looking at the language Clinton used during the Benghazi tragedy, I recalled a fantastic college course I took, which used as its textbook You Just Don’t Understand: Men and Women in Conversation, by Georgetown University’s linguistics professor Deborah Tannen. 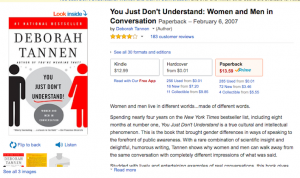 In that book, Tannen helps us understand the underpinnings of conversation between men and women. What I learned most from that class, and Tannen’s book, is to listen carefully to what people say. And what they don’t.

Here then, my reporter’s hat on and pencil in hand, is my neutral takeaway:

Then-Secretary of State Clinton did as she was told by a superior – likely President Obama – by linking the Benghazi attack to an anti-Muslim video. BUT, if you pay attention to what Clinton did NOT say, you can read between the lines quite easily.

After reading a summary of the Benghazi attack in The Atlantic, and another one from NBC News, about the Republicans’ report on that tragedy, as well as FactCheck’s detailed and thorough timeline of the Sept. 11, 2012 terrorist attack, this is what I believe.

But please, don’t take my word for it. That would be a mistake. Instead, put on your thinking cap and, using FactCheck’s hour-by-hour timeline, see for yourself.

Roughly about 10 p.m. that same night, Clinton issued her first public statement about the attack. BUT, her use of the word “some” as in, “Some have sought to justify this vicious behavior as a response to inflammatory material posted on the Internet,” tells me that SHE did not believe that to be the case.

This proves true when, one hour later, at 11:12 p.m., Clinton sends an email to her daughter, Chelsea, saying this: “Two of our officers were killed in Benghazi by an al Qaeda-like group: The Ambassador, whom I handpicked and a young communications officer on temporary duty w a wife and two young children. Very hard day and I fear more of the same tomorrow.”

That email wasn’t discovered until 2015. However, let’s talk about what it does show – a woman clearly in pain, over a loss she considered personal. And that email seems to tell the greatest truth about what the U.S. administration knew, and when they knew it.

So why did Clinton lie to the American public? Or did she? Maybe she just repeated the party line that an anti-Muslim video inspired a mob attack.

I think this is more likely: In ensuing public statements, Clinton continues to distance herself from that very stance, using the word “some,” as in “some people – but not me,” she is trying to tell us – believe the video inspired the embassy attack.

That singular phrase is very telling. For if Clinton believed the anti-Muslim video was responsible, or knew that for sure, she would have used the pronoun “we.” Yet she didn’t.

However, President Obama continued to tell the American public, on late-night TV and other shows, such as The View, that Benghazi was the result of a mob attack due to the religious video.

Could that be because he was up for reelection?

In a nutshell, President Obama, as the top dog, should be blamed for misleading the public – not Clinton – who was simply following orders. And who risked being axed, if she broke from the party line and told the truth. And let’s be honest: she wouldn’t be the first whistle-blower to lose her job, would she?

So, perhaps for Clinton, it came down to this: What good can I accomplish then, if speaking the truth gets me fired?

I’m not an American citizen but have always thought highly of the Clinton and Obama Administrations so I was always perplexed when I heard the negativity surrounding Ms. Clinton as she campaigned for the presidency. I surely would have voted for her given the opportunity. Trump’s win, as shocking as it remains, is but a manifestation of all that plagues America at the moment. The words “at the moment” are key here for he would have never come even close to winning had he run during a different era. Simplistically put, his win defines the turmoil the US finds itself in and highlights just how desperate so many Americans have become. From memory, never before have so many protest votes resulted in the victory of the wrong candidate. All we can do now is wait and see what the next four years will yield and hope the world is not worse off under his “style” of administration.