Orlando: My Son Could Have Been Murdered

My heart is heavy after hearing the news out of Orlando. Upon realizing that the mass shooting at a gay nightclub is the worst one in U.S. history. 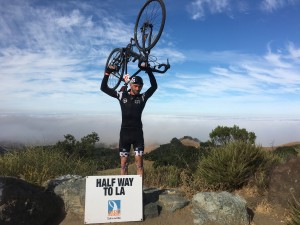 My son Zach, during AIDS/LifeCycle 2016.

My son is gay. So was my Uncle Robert. I’ve been around gay family members since the early 1970s, after my mother finally found my missing uncle. He had run away from home decades earlier because of family mistreatment over being gay.

I loved my Uncle Robert. He was as handsome as Clark Gable, a snappy dresser, and one of the most charming men I’ve ever met. He and my mother had a happy reunion when he visited our West Virginia home, and again later, when we drove to Los Angeles in 1975 to see him. Because of Uncle Robert, I saw the famous smog L.A. is home to and tasted spumoni for the first time, experiencing its delicious flavors of chocolate, pistachio, and cherry-almond. I can still remember waking up in his little apartment, which he shared with a male “roommate.” Hear my parents—yes, even my somewhat bigoted father—chuckle about how the fellow was really Robert’s lover. My uncle, you see, had not come out. No wonder, given that he felt forced to flee his own home because of being gay.

But Uncle Robert’s sexual orientation didn’t change my mother’s love for her brother. A religious woman, she knew true Christianity allows no room for homophobia. It didn’t change my father’s (who was agnostic) admiration of him, for the intelligence and charm his brother-in-law exuded. And it certainly didn’t matter to me that my Uncle Robert was gay. To me, he was simply my fun-loving, smooth-talking uncle. My mother’s older brother, whom she didn’t know was dead or alive, yet loved enough to find out, spending considerable time and energy and finally tracking him down through the Internal Revenue Service.

My son is gay. In fact, until recently, he worked in gay nightclubs in Washington, D.C., Miami, Florida, and San Francisco, California. I am not a nightclub person. They are too loud and too bright for me, neither of which I can tolerate for very long. But living so many miles apart, and both of us having hectic schedules, visiting him at work was often the only way we could see each other. Like the time I had a long layover in Miami, where I visited Zach at Halo; I’ve visited both when the clubs were open and when they were closed. Doing this, I came to know something of the people who do frequent these places. And I can tell you this: never once did I feel unsafe. As a woman who herself has been a crime victim, at the hands of a straight man, that’s important.

But more than that, I came to realize that for party-loving people, gay nightclubs offer a popular, hip social scene. You meet all kinds of people there, from millionaires to Congressmen to single mothers. Most intriguing to me was the fact that not all of them are gay. Which makes what happened in Orlando doubly tragic: in targeting what is perceived as a gay hangout, the killer undoubtedly killed straight people, too.

Zack is currently in L.A., where he was one of 2,300 cyclists who rode 545 miles over seven days for AIDS LifeCycle, raising $16,000 in the process for medical research. (His team raised $70,000.) He is the kindest, sweetest man I know, as well as one of the brightest and most generous. As a small boy who picked and brought me flowers, and who was beloved by all his female classmates from the time he entered kindergarten until he graduated high school thirteen years later, Zach remains a true gentleman. He is also quite handsome and when he enters a room, heads turn.

As a mother, my heart would break if I received a call saying a mass murderer had entered a nightclub and killed my beautiful son. 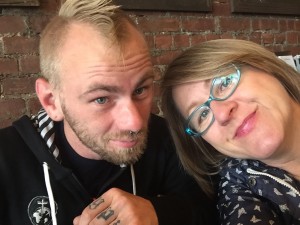 Goofing off with Zach during his April layover in New York City.

As a mother, I weep for all the mothers, sisters, daughters, and aunts who weep for their loved ones, slain in such a barbaric way in Orlando. Whether they were gay or straight makes no difference. I weep that any human would slaughter another over something as complicated and so misunderstood as sexual orientation.

We are not judge and jury of our fellow man, any of us. We lack the capacity to understand or recognize why people are as they are. And we certainly can’t read hearts—the only true measure of any man. No, we are instead misguided, imperfect creatures capable of giving offense and taking it, on any given day. Any hour.

I am praying for Orlando. And for the rest of us, and for what lies ahead, if such senseless violence and hatred against our fellow humans continues unabated.

Editor’s Note: Effective June 2, 2016, Ms. Berry’s blog began appearing each Thursday, rather than Monday, as it once did. Berry is a New York Times best-selling author and a recipient of the Pearl Buck Award in Writing for Social Change. She has won several other awards, for investigative journalism and her weekly newspaper columns, and her memoir, Sister of Silence, placed first in the West Virginia Writers’ Competition. Ms. Berry speaks about overcoming abuse through awareness, empowerment and goal attainment at conferences around the country. To read an excerpt of her memoir, please go to the Sister of Silence site. Check out the five-star review from ForeWord Reviews. Or find out why Kirkus Reviews called Ms. Berry “an engaging writer, her style fluid and easy to read, with welcome touches of humor and sustained tension throughout.”